This morning of mindfulness will be in the form of a unique, Plum Village ceremony, to remember and honour the passing of loved ones. Come all.

Ceremony to Remember the Deceased

Dear Friends in the Dharma,

We have a wonderful opportunity for the whole sangha to come together on March 7th, to take part in an interactive way in a Ceremony to Remember the Deceased.

Sister Annabel will guide our Mindful Morning, during which the ceremony will be taking place. She will be leading the ceremony with support from her monastic sisters.

Attendees will be invited to create a space in their home for a shrine table or other peaceful space, and to place there an object that reminds them of the person (or people) they are remembering and to write a letter to them. Attendees might also like to share in small dharma sharing groups after the Ceremony.

Almost a year ago, around 250 of our Interbeing family from all parts of our four-nations sangha came together to join an online Ceremony to Support the Sick.  It now feels appropriate and supportive to follow that with this Ceremony to Remember the Deceased (not to be confused with the ‘Ceremony for the Deceased’ in the Plum Village Chanting Book).

This ceremony was ‘invented’ by Sister Annabel and OI members during an Order members’ retreat in 2012.  Those who took part in 2012 found it a moving, and healing experience, and we are looking forward very much to offering this again in an online setting. 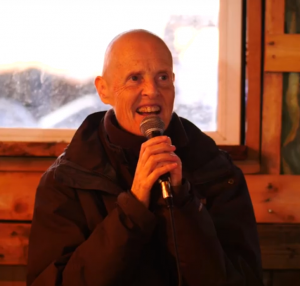 Sister Annabel’s dharma name in Vietnamese is Chan Duc, which translates to True Virtue in English. In her youth she studied Classics and Sanskrit before going to India to study and practice with Tibetan nuns, and met Thich Nhat Hanh (Thay) in 1986 and in 1988 became the first Western woman to be ordained as a nun in his Order of Interbeing.

Sister Chan Duc was ordained as a Dharma Teacher in 1990, went on to become Director of Practice at Plum Village, then Abbess at the Green Mountain Dharma Centre in Canada, and currently divides her time between teaching at the Thai Plum Village International Foundation (founded by Thich Nhat Hanh in 2011) and acting as Dean of Practice at the European Institute of Applied Buddhism in Germany (founded by Thich Nhat Hanh in 2008). Since then she has travelled widely leading retreats and giving talks throughout the world.

You only need to register once, then you can enjoy all of the Monthly Mindful Mornings, you wish!

We use cookies on this site to improve your experience and ensure the site works as expected. Find out more.